Die Zehn Gebote commemorates the work of the Polish film-maker Krzysztof Kieślowski (1941-1996). Within the span of three hours, it seeks to enact the stories which compose Dekalog, a series of ten films directed by him and broadcast on Polish television in 1989. Stephan Kimmig takes up the challenge of bringing this rich material onto the stage by reducing each story into an abstract of itself, into, as it were, a postcard —a picture and a couple of lines— from that vast cinematographic country. In this theatrical rendition, the different plot lines take place simultaneously and are intertwined with each other, thus conveying the sense of unity in Kieślowski’s universe, which is full of recurring themes and characters. 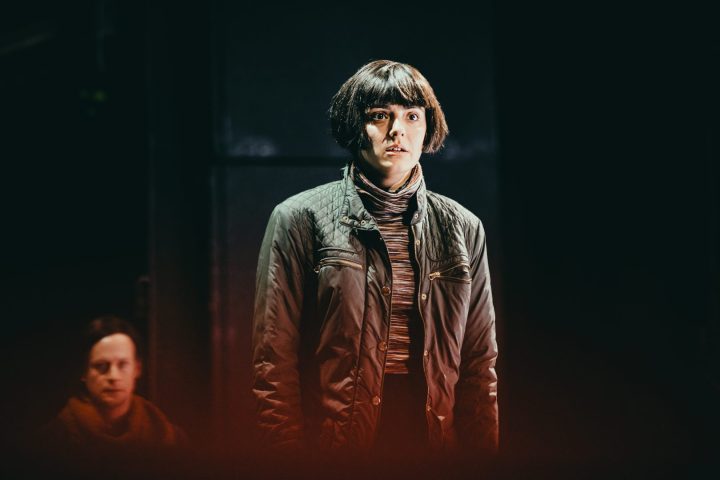 Each story deals with the breaking of one of the Ten Commandments, and questions the values of Judaeo-Christian ethics as well as our own. This preoccupation with morality, stressed in the prologue, is explored theatrically in different ways throughout the play. In many scenes, actors do not face each other when speaking, but their body language indicates that characters are doing so. The disruption of the natural spatial orientation opens up their intimacy to the audience, who thus have to mediate the relationships between them. The divide between stage and represented world is furthered heightened in scenes where actors share a physical space which characters do not. We see a man, his wife and his lover interacting with each other in two superposed fictional spaces, forming an image which visually synthesises the conflict of their story.

The only object on the stage is the cabin of a crashed lorry, which the actors can climb up and down. It is a fragment of the broken world they inhabit, which can still be utilised by them in different ways, if not for the purpose it was originally intended. The stage is surrounded by opaque translucent flats, which are lit from behind with either a cold or a warm white light. In the proscenium, there is a row of five chairs on each side, where the actors sit and become the spectators of their own story and those of others. This further contributes to dissolving the fictional wall between the actors and audience, making the questions raised by their lives and actions all the more relevant and urgent for us today.

Summary: The ambitious staging of an extensive cinematographic work, which puts ethical questions at the centre by experimenting with montage techniques and the use of space.